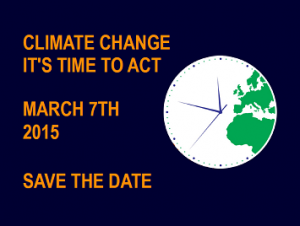 Report on TIME TO ACT ON CLIMATE CHANGE rally held on the 19th of November.

Organised by Derby Climate Coalition, chaired, by Keith Burchell.
45 people attended and 12 other organisations.
Everybody said it was a good and useful meeting. The speakers were excellent and it was exceedingly useful to hear how and what the other organisations were doing in relation to Climate Change.

Keith introduced a number of short contributions from associated organisations. They were limited to 2.5 minutes each.

Danni is a founder member of UK Uncut, was involved in the West Burton power station occupation, and is currently involved with 350.org, started by Bill McGibben, particularly concerning divestment from fossil fuels, and the pacific warriors climate change campaign.
She told us that there have already been big wins in the divestment campaign, within universities, Stanford being the first to divest, and Glasgow the first European university to divest.

City authorities, faith groups (eg Quakers) are aiming for divestment.
Hundred and eighty-one institutions and over 600 high profile individuals have committed to divestment so far, including the Rockefeller foundation, and the BMA. The campaign is committed to socially and morally bankrupting the fossil fuel industry. Next February there will be a  Divestment Day Global.

Questions were then taken from the floor.

What about China?
A. China is doing well, if slowly; conscious it must address its pollution problem too. Commitment by Obama and Chinese president good news.

How do we proceed? And get young people involved
A.  Generate Local organisation; community action.
Many universities are campaigning; though there is no action group at University of Derby

What about incineration?
A. To deal with our waste sustainably, we need to focus on prevention, reuse, recycling and the generation of 100% renewable energy via anaerobic digestion. See FOE site.    http://divestinvest.org/ aren’t recommending specific positive climate impact investments will be developing suggestions

What can we do about divestment regarding pension funds?
A. Many are campaigns are starting through People and Planet and Universities. See http://shareaction.org/greenlightcampaign http://gofossilfree.org/uk/ and http://moveyourmoney.org.uk/

Flooding insurance
A. Insurance companies are a leading sector in recognising climate impacts on business costs

Is it worth targeting individual politicians?
A. Yes, always.

Russell Brand?
Making the right noises on divestment. Listened to by some.

Is it worth looking at Ebico as an energy supplier?
A. Yes, see www.ebico.org.uk

Peter Robinson wound up the meeting, urging those present to get involved with Derby Climate Coalition steering group, so donate if possible. He said that important links were being forged with the unions, that further public meetings would be held.
He publicised the ‘Time to Act’ march next March 7th organised by the Campaign Against Climate Change (nb Climate Coalition is calling for a mobilisation in June), and the need for a delegation to go to Paris for the climate talks next spring.
A collection raised £66 to contribute towards expenses for the meeting. Nine  Million Climate Job pamphlets were sold.