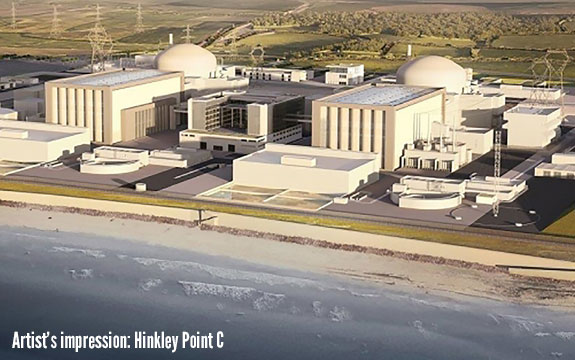 Writing in the Guardian, executive director of Greenpeace UK John Sauven says “the spectre of [George Osborne’s] misguided energy policy could haunt Britain for decades, and at Hinkley in north Somerset, for millennia.” While cutting subsidies to solar power, Osborne “lavished new subsidies on the fossil fuel industry” and nuclear, Sauven argues. Hinkley Point is an “Olympic-sized subsidy swallower,” he says, with subsidies likely to rise to five times as big as expected through top-up payments. Sauven concludes: “Unless the new government sees sense and calls out their predecessor’s mistakes for what they are, two generations of UK consumers will be left footing the bill for the most expensive act of political face-saving in the history of British politics.”

Elsewhere, Richard Black, director of the Energy & Climate Intelligence Unit looks at some of questions still outstanding on Hinkley, such as: “Can Britain afford it?”, “Do we need it?” and “What about the waste?”.

You may not have picked up comments on the contrast between the Hinkley project and the way South Korea is building four nuclear reactors for the United Arab Emirates, to an already proven design and at only a fraction of the cost.

Although the UAE only began talks with Korea in 2009, the year we began negotiating with EDF for its two 1600 megawatt (MW) reactors at Hinkley, the four 1400 MW reactors for the UAE (hence their name APR1400s) are already under construction, with the first due onstream next year and the rest to follow by 2020. For £15 billion, they will thus supply 5600 MW of electricity, much more than Hinkley’s 3200 MW, so grotesquely subsidised that even Decc admits its cost could eventually be £37 billion.

The author is  CHRISTOPHER BOOKER, from yesterdays’ Sunday Telegraph, and the article is called

Saved in the ‘Nick’ of time from the world’s most expensive power station?