We are putting the following question to the full meeting of the Council on 6 pm, 25 November 2015. 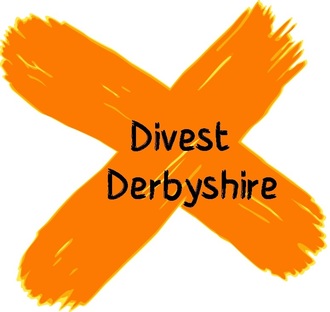 Considering that 80% of all known fossil fuels must stay in the ground to avoid warming by more than 2 degrees as well as the need to ensure Pension funds are not left in these potentially stranded assets, will the Council recommend that the Derbyshire County Council Pension Fund

1. Derby City Council has no direct investments in fossil fuel industries but the Derbyshire County Council Pension Fund has £290 million invested in fossil fuel industries, including Royal Dutch Shell, BP and Rio Tinto. Fossil fuel industries make up nearly 6% of the pension fund.[a]
2. The pension fund affects over 170 employers in Derbyshire including Derbyshire County Council, all the borough and District Councils in Derbyshire [b]; Derby City Council; Chesterfield College; Derby College; Derbyshire Fire Authority; Derbyshire Police Authority; Peak District National Park Authority; University of Derby and a large group of smaller employers.
3. 97% of climate scientists agree that humans are the primary cause of recent climate change, largely due to the release of greenhouse gases from the combustion of oil, coal and gas for heat and power.
Climate change is happening now – we’re already experiencing global temperature rise, warming oceans, shrinking ice sheets and more frequent and intense extreme weather events. [c] Whole ecosystems are threatened, and people’s lives are at risk due to flooding, food and water insecurity, creating climate change refugees. [d]
4. In order to stop the global climate warming by 2 °C above pre-industrial levels and avert global catastrophe, 80% of all known fossil fuels must stay in the ground. [e] By removing investments in fossil fuel companies Derbyshire County Council will be showing its commitment to creating a healthy, sustainable future for both the people of Derbyshire and the planet as a whole.
5. There is also a financial argument to divest from fossil fuels. The need and growing political pressure to leave as much of our fossil fuels in the ground make the risk of stranded assets (worthless fuel stocks that regulation will prevent from being burned) very real. [f] At the same time it is becoming more expensive both to find and to extract the remaining fuel deposits, while, renewable energy technology is becoming more efficient and less expensive. [g]. Both of these factors create risks for investors. People and institutions that own shares in fossil fuel companies will see the value of their investments decrease. [h]
6. Institutions across the world including churches and universities, the Environment Agency [ i] as well as local authorities in the UK such as Bristol City Council and Oxford City Council have already committed to divest from fossil fuels. [ j] Let’s see Derbyshire join them in making this small but impactful commitment.
7. The above question is forms part of the Derbyshire wide petition, which can be downloaded from http://www.transitionchesterfield.org/divest-derbyshire/ This petition is supported by the following Derbyshire organisations (in alphabetical order): Calow Against Gas Extraction (CAGE); Derby Climate Coalition; Glossopdale Transition Initiative; Melbourne Area Transition; Sustainable Edale; Sustainable Hayfield; Transition Belper; Transition Chesterfield, Transition Hope Valley, Transition New Mills. Transition Wirksworth; University of Derby Students’ Union.