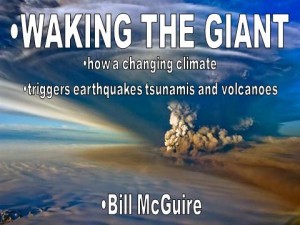 His slides are attached.  : Waking The Giant DERBY

Here is Brief Overview of Waking the Giant:

An astonishing transformation over the last 20,000 years has seen our planet flip from a frigid wasteland into the temperate world upon which our civilisation has grown and thrived. This most dynamic episode in Earth history saw the crust bouncing and bending in response to the melting of the great ice sheets and the filling of the ocean basins; triggering earthquakes, spawning tsunamis and provoking a lively response from the world’s volcanoes. Now there are signs that human-induced climate change is encouraging the sleeping giant beneath our feet to stir once again. Could it be that we are on track to bequeath to our children and their children not only a far hotter world, but also a more geologically fractious one?