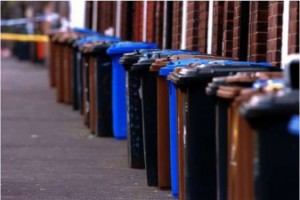 The Council wants to take away your and your neighbours’ recycling bins.

You’d then have to put all your waste in your black bin. This would be collected weekly.

This change is only being considered for inner city areas. People living in leafy suburbs will still get a recycling service.

The council say they hope this will reduce litter and dumping on the streets.

If you object to people on your street being treated like this:

1. Tell your councillors. Details underneath.

2. Go to the meeting tonight (Tuesday 30th April at 6pm, Council House) where it will be discussed. Bring a poster if you like. Meet at 5:30 outside.

Ten years ago the council started kerbside collections of recycling. At present about half the waste from households is recycled. This saves lots of energy, is good for the environment and helps reduce climate change and weird weather.

The rest goes to a landfill – a giant tip – for which the council has to pay more than £80 per tonne to use.

The council has already decided to start charging for brown bins. So only people who pay £40 a year will have these next year.

The council has also decided to give everyone larger blue bins so that from June this year all paper and card will go into these as well as bottles, cans and drinks cartons.

Before either of these changes have happened, the council now want to stop all recycling in nearly 140 inner city streets. The report is going to the council tonight for backbench councillors to comment on. It will then go for a decision to the council’s ‘Cabinet’, probably in June.

The main Council report is available at www.tinyurl.com/DerbyRefuse

And the report about scrapping recycling is at

Tell your councillors what you think!!!