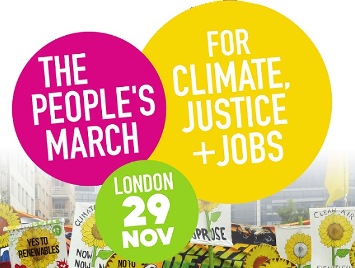 On the 29th of November there will be marches, throughout the world,  around the UN climate talks in Paris. Derby Climate Coalition is supporting the London march. Our coach leaves Belper at 8.30 am and Derby Full Street at 9.00 am. It is expected that we will sell most tickets at £7.50 but if you can afford it please buy the full price ones and there area few £1 tickets.

Details are subject to fine tuning and further information will be sent out to those who register. Please register here: https://nov29derbyandbelpercoach.eventbrite.co.uk

Derby Climate Coalition and 38 Degrees invite all those people who are interested in doing something against potential fracking, in their area or across Derbyshire people to attend the next Steering Group meeting on Tuesday 13 October at 6.00 pm, room 11 at Derby Council House.

To Frack or not to Frack?

A report by Jean McDonald

The Government is hell-bent on introducing fracking in parts of Derbyshire, including inside the city boundaries. On Monday evening (September 21)  I attended a meeting in Derby organized jointly by Derby Climate Coalition and Derby 38 Degrees which looked at the economic and environmental consequences of fracking.  This was very clearly spelt out by Brian Davey, a freelance ecological economist from Nottingham.  Another speaker, Nigel Lee, showed us the actual plans and proposals for Derbyshire.  Chris Williamson, Derby North MP until the 2015 election also spoke about Labour’s views on fracking and in particular, Jeremy Corbyn’s views which can be seen in a document “Protecting Our Planet” which you can find online.

Around fifty individuals attended the meeting.  As well as members of Derby Climate Coalition, 38 Degrees, there were members from Friends of the Earth, local trade unions, Frackfree Notts, Frackfree Derbyshire, a member from Derby University and probably other groups I am unaware of.  There was also a good turnout from the Green Party. END_OF_DOCUMENT_TOKEN_TO_BE_REPLACED