From the Campaign against Climate Change 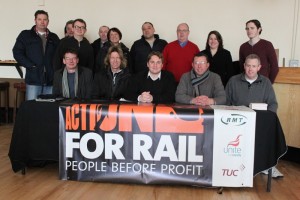 Here is a photo from Derby of some of the people who took part in the action of Rail event on March 27, 50 years after the announcement of the Beeching closures. .

We had an ENERGY WE CAN ALL AFFORD meeting in Derby last night, organised by Derby Climate Coalition, just one of a series of 40 public meetings: see www.energywecanallafford.org END_OF_DOCUMENT_TOKEN_TO_BE_REPLACED

In June 2011 the news came through that the Canadian multinational Bombardier had not won the Thameslink contract. The implications for employment and Derby were horrendous, the direct loss of 1400 jobs in Derby, and many more indirectly in the region. This decision was made with no consideration given to the social & economic impact on the UK in awarding this contract overseas. The loss of the contract could have led to the shutdown of the last railway manufacturing plant in Britain, and one might argue that this has not happened because of the mighty fight back by members of the public and the unions.This case study explores how climate activists can work alongside trade unionists in what was at first appearance merely an ‘industrial’ dispute, about jobs. END_OF_DOCUMENT_TOKEN_TO_BE_REPLACED