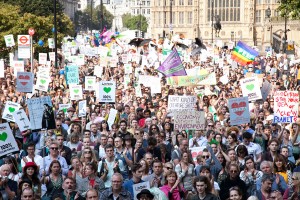 Seven of us went down from Derby(shire) on a mini-bus to the London Peoples Climate Change march, (click here for a picture ) others went independently and others went elsewhere. The front of the march arrived at Westminster about 2 pm. I walked back to the end. It took 50 minutes and I got to the Embankment station. I then went back to the front, by then the rally was ending and many people were leaving. It will have taken about 90 minutes for the march to pass a fixed point. Sometimes 30-40 abreast. So I guessed there were 30,000 people there. Avaaz said 40,000.

Here are some more photos https://secure.avaaz.org/en/climate_march_reportback/?bXgsfcb&v=46379

Avaaz also said there were more than 2,700 demonstrations across the world. And 380,000 people in Manhattan.  The New York Times says the march was “a spectacle even for a city known for doing things big”,.

I believe there were a couple of hundred people in Nottingham (organised at very short notice), 400 or so at Sheffield, a couple of thousand in Manchester (focusing upon fracking and the Labour party conference) and more than two thousand in Bristol and Edinburgh

So all this is absolutely magnificent and should provide a fillip for activists up and down the country. We in Derby came back fired up, determined to do more locally, and to intertwine across the region and nationally. At long last the world might be waking up!

But the London demonstration also highlighted a weakness. There were very few trade union banners on the march. The million climate jobs argument can help provide a bridge.