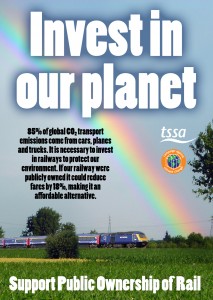 On Tuesday 19 August, we joined forces our friends from  Action For Rail,  Bring Back British Rail, We Own It,  the Campaign against Climate Change and the new All on Board campaign to protest against rail price increases increases in the New Year. Hence about 15 of us handed out leaflets at Derby railway station, and the same thing happened at more that 60 stations. Our protest was shown on BBC Midlands TV, and Nadine Rae, from the railway union the TSSA, was interviewed.

We also displayed the above A2 poster which has been produced by the TSSA in conjunction with the Campaign against Climate Change.

The message, as you can see, is that in order to combat global warming  it is necessary to invest in railways.  85% of global CO2 transport emissions  come from cars, planes and trucks.  Planes produce eight to eleven times the CO2 of high speed rail and lorries emit about six times more CO2 than trains for every ton carried. Radical improvement to the rail services are required if we are going to replace air and road travel.

Copies of this poster are available; all you have to do is email us.